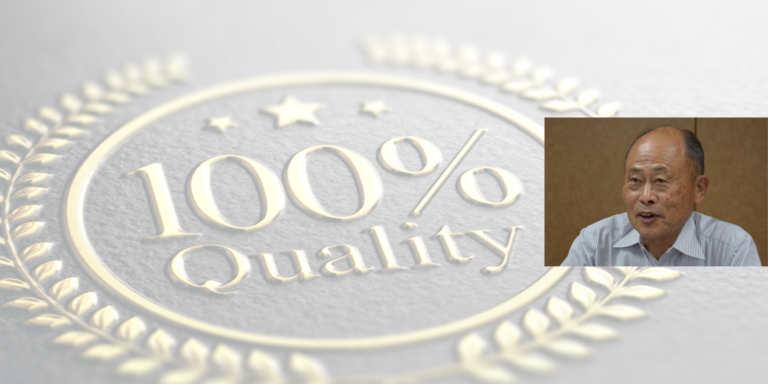 Toshiko Narusawa: Ten years ago, you were tasked with implementing Dantotsu Quality Activities at TICO. How did that come about and what was the reason?

Sadao Nomura: I became an advisor to TICO at the request of Vice President Tatsuro Matsuura, in July 2006. With the idea of acquiring a Swedish company and with industrial vehicle manufacturing operations in Italy, France and the United States, TICO wanted its six businesses and their suppliers to be able to improve their quality. I was being asked to take on a big role, and I think that was because of my previous experience working for Toyota Motor Corporation both in Japan and overseas.

TN: Can you tell us about your experience at Toyota? You have held several roles there, ranging from sales to a senior role at the Motomachi Plant and an assignment in Indonesia.

SN: At that time, Toyota was focusing on knockdown assembly abroad, which – due to the rapid growth – Toyota workers could not support. I spent six years at Toyota Astra Motors in Indonesia together with Mr Matsuura, with whom I shared quite a bit of pain. After that, I was a second-level section chief for the body department at the Motomachi Plant for four years. There, we made a number of key quality and performance improvements that led to best-ever new vehicle launch performance with full-scale production volume stability attained in the first month of production for Toyota’s best-selling 6th generation Mark II mid-size passenger car (we had a takt time of 54 seconds at an early stage). At the time, competition was fierce and expectations from dealers were extremely high. I am glad I was able to contribute to the increase in sales we experienced.

TN: Did that approach to production preparation lead to Toyota’s current method?

SN: Even though what we did at the time was quite rudimentary, it is true that until then it could take over a year for production to stabilize. We did it in one month. Critically, we created a preparation manual that highlights all the problems that can be encountered in the process and the countermeasures that were previously implemented in past new vehicle launches. Of course, the company’s approach to production preparation is much more advanced now.

TN: What about your experience in Australia and South Africa?

SN: In Australia, which was an acquisition for Toyota, I was asked to lead the production ramp-up for the new Corolla. It was a difficult environment with old equipment and employees who felt disenfranchised, but we were still able to reduce quality defects by 90%. I think Toyota Industries had a clear expectation in terms of changing the mindset and behaviors of the employees there.

Four years after returning to Japan as the general manager of the body department at Motomachi, I was sent to South Africa. Here, even in a country with a culture completely different to Japan, I gained very valuable experience strengthening the conviction that quality will improve if the basics are covered and the employees are motivated.

One of the challenges I faced was the limited impact I could have as an advisor. I had no direct authority on employees at any of the companies that I supported.

SN: Before the Dantotsu initiative, I visited each factory once every few months for a year, pointing out problems and leaving some homework for people to do. However, each time I went back, they hadn’t done it. Determined, I left homework again. On my third visit, it was almost the same as last time. So, I asked top management to make it a top-down company-wide requirement. I’m grateful they followed my advice. That’s how Dantotsu began.

TN: It is critical for top management to convey the message that improvement should be taken seriously. I think another problem you faced when trying to tap into everyone’s potential was that people were working in silos and not collaborating enough. I know that one of the key reasons for the success of the Dantotsu initiative was the introduction of the eight steps. And, of course, there were the legendary “Nomura memos”.

SN: If you want people to do what you teach, you have to make sure that you are communicating effectively. So, for each new issue we tackled, I took detailed notes of the countermeasures we devised and handed them to the teams. There were around 300 memos over the years, all handwritten (mostly at night).

TN: I was surprised to see the handwriting was also a main feature at the Takahama factory.

SN: I believe that when you write by hand you convey your thinking much more effectively. Numbers and graphs that are hidden in a computer don’t communicate the same sense of urgency and don’t create remorse or the sense of discovery you need in order to get people engaged.

TN: What can you tell us about the 8 Steps and the critical role of the team leader in implementing them, as the person closest to the front-line work?

SN: I have standardized the process and “codified” it in the 8 Steps based on my experience across different countries and businesses. If you ask people to simply execute your order, you will be perceived as “pushing”. In reality, the 8 Steps make so much sense and are so rational that you don’t really need to convince anyone. When people try them, they immediately see the impact and are bought in. Executives are naturally interested in them, too, and their praise for the approach goes a long way motivating people.

The 8 Steps – as well as our Weak Point Management – are based on the idea of making our relentless quality improvement work commonplace and persevere in our tackling of every defect. This is how a company can push the number of defects to nearly zero.