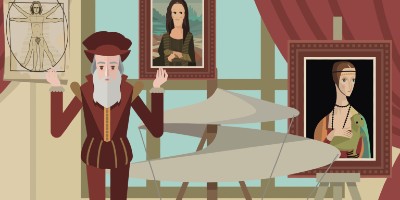 The world doesn’t need any more evidence of the greatness and genius of Leonardo da Vinci. From his artistic prowess to his discoveries and inventions in fields as diverse as aerodynamics and anatomy, there is no doubt Leonardo gave an immense contribution to the advancement of science and human knowledge.

Yet, there is an element of his contribution that has so far been overlooked – the lean-like nature of his way of thinking. Indeed, the more I leaned about Lean Thinking, the closer a connection I found with Leonardo. This has pushed me to deepen the possible connections and relations between lean and Leonardo.

Inspired by John Shook’s work, I find it natural to look at Lean Thinking from different perspectives. My aim is to explore and potentially highlight how different developments in science, culture, history, economics, or the arts might influence – directly or indirectly – our understanding and shaping of Lean Thinking. So, could Leonardo’s method and way of thinking have contributed to lean as we know and see it today?

According to John Shook and his double funnels, Lean Thinking is a consistent mix of ingredients that incubated at Toyota over the course of 30 years and were released to the outside world through a diffusion/dilution process that leads to applicative gaps of lean implementations worldwide. In this sense, could Leonardo da Vinci help us to bridge such gaps?

In order to answer this question, I drew a comparison between the five Lean Principles, as described by Jim Womack and Dan Jones, and the seven Da Vincian principles popularized by Gelb and illustrated in the book How to Think like Leonardo da Vinci: Seven Steps to Genius Every Day.

The Da Vincian principles have been presented by Gelb as the conceptualization of Leonardo’s methodology and thinking. Here they are:

In the light of all this, I find it impossible not to notice a number of analogies between Leonardo’s thinking and lean. First of all, in both cases there is a strong focus on the customer, who defines value according to his perspective. Much like for a lean organization providing value to customers is the main goal, so Leonardo felt the urgency to satisfy his “customers” – usually important patrons of major cities – to keep benefiting of their protection and sponsorship. Even when he didn’t really believe in what they asked him to do and he’d rather work on other, more fulfilling projects.

Another analogy with lean can be found in Leonardo’s tendency to make sketches of his concepts and ideas. These sketches don’t have to be intended just as ways to visualize the concept and to improve it, but also to test it and investigate different alternatives in terms of mechanics, connections, or materials. This approach is akin to the lean concept of Kaizen and, as suggested by Tarelko in Leonardo da Vinci: Precursor of Engineering Design, could be interpreted as a propensity for Rapid Prototyping, a common procedure in lean product development. This means the testing of his concepts was diluted throughout the design: testing and designing happened in parallel and their results influenced each other. It’s a simplified version of Set-Based Concurrent Engineering.

Finally, Leonardo constantly wrote notes on the side of the page. These could be reminders of how to develop a physical prototype, details that shouldn’t be forgotten, or insights for other important work. Essentially, this is what in Lean Thinking and Practice is now called Job Instructions and standardization – guidelines that are to be followed by whoever oversees a job once they are properly trained for it. In the same way, Leonardo described the procedure step by step, for the sake of clarity and simplicity.

As I mentioned when I described the seven Da Vincian principles, Leonardo’s projects were driven by experience, without relying much on theory. His invaluable life experience allowed his to even develop his own encyclopedia! He learned by doing, making mistakes, and understanding what didn’t work in each experiment and why. Doesn’t this sound very lean to you?

BRIDGING THE GAPS OF LEAN IMPLEMENTATIONS?

What surprises me the most about Leonardo’s method is related to his learning process. As previously said, he was eager to learn, regardless of the topic. Indeed, Leonardo’s learning process embraced different fields and disciplines. Similarly, Set-Based Concurrent Engineering promotes the development of “multidisciplinarity” in project teams instead of silo thinking, as a way to leverage synergies among different areas and functions.

As ever, Leonardo was one step ahead. He could find correlations among seemingly unrelated topics and exploit them to create new knowledge in different fields. In other words, interdisciplinarity is one of the major tools that Leonardo left us and that I think should be actively incorporated into modern lean practices. This would especially help us to address the gaps that exist in lean competencies management and development.

For this purpose, I developed a conceptual model – the Comb Model – that can be used to map and evaluate the available skills with the aim of integrating interdisciplinarity in the management and development of competencies within a company and boosting collaboration. As a matter of fact, four algorithms have been developed to efficiently assign the right resources to a project given its specific requirements and the available competencies. In a lean organization, this is turn into a powerful driven of synergies and mutual learning.

Leonardo da Vinci (or should I say LEANardo?) gave a very relevant, although indirect and unconscious contribution to Lean Thinking. His ideas have greatly influenced scientific thinking and, to this day, inspire us to experiment, embrace uncertainty and problems, and make unexpected connections between elements of the reality around us that we consider unrelated. So aligned with lean is his way of thinking that I wouldn’t be surprised if one day, during a visit at a Toyota plant, I saw a banner hanging from the ceiling saying: “Leonardo was here”.