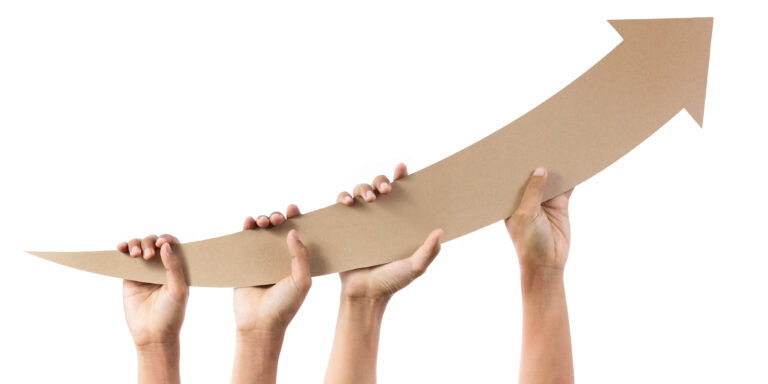 Toyota Industries Corporation has enjoyed the largest share of domestic sales of forklift trucks for 50 consecutive years and the top share in the world market. While they were in process of expanding the business worldwide, there was a time when TICO experienced a problem with quality. In response, they engaged in 10 years of steady and tenacious company-wide efforts through the “Dantotsu Quality Activities”. The company worked with parts manufacturers to improve manufacturing quality, incorporated production preparation and manufacturing requirements into product design, and created a mechanism to prevent the outflow of defects to the market. This article reports on the company’s activities to change awareness and behavior toward quality improvement, regardless of cultural and environmental differences between countries.

QUALITY AS THE STARTING POINT FOR MANUFACTURERS

Toyota Industries entered the forklift truck market in 1956. Since then, it has steadily grown to become the top domestic branf for sales share. The attractiveness of the product itself, which has both ease of use and high durability, a strong sales and service network, and the productivity to efficiently produce a wide variety of products have earned the company the support of customers. Toyota Industries Corporation also has had production sites overseas since the 1980s. In 2000, it acquired Swedish Company BT Industries. US-based Raymond, which is under the umbrella of BT, also became a member of the group. TICO currently provides forklifts worldwide under four brands, Toyota Logistics & Forklift, BT, Raymond, and Chesab. It can be said that it is a leading company in the industry.

It wasn’t all a walk in the park. While expanding its overseas business, the quality of factories abroad became a major issue in the mid-2000s. Therefore, under the top-down policy that “quality is the starting point for manufacturers and quality improvement is indispensable for growth”, in June 2007 TICO set itself a lofty goal and kicked off the global Dantotsu Quality Activities. The target for the first three years were to halve quality defects of assembly plants and suppliers every year, for an 88% total reduction, and halve the cost of market complaint.

Over time, this initiative has completely transformed the quality performance of TICO’s overseas companies. It changed the attitude of affiliates from “finding defects by inspection” to “creating quality”. For example, in 2014, Raymond received the Industry Week Award for Best Plant in recognition of its pursuit of zero defects. The efforts of overseas companies have greatly stimulated domestic factories, too: in the first three years since the introduction of the Dantotsu method, their yearly results have been reached almost entirely by achieving the targets of each country (excluding the reduction of market complaint costs). Critically, the activity also extended to TICO’s suppliers, some of whom – following the 2010-2012 Dantotsu-II program and the 2013-2015 Dantotsu-III program – could achieve the cumulative reduction target of 88% of market complaint costs. 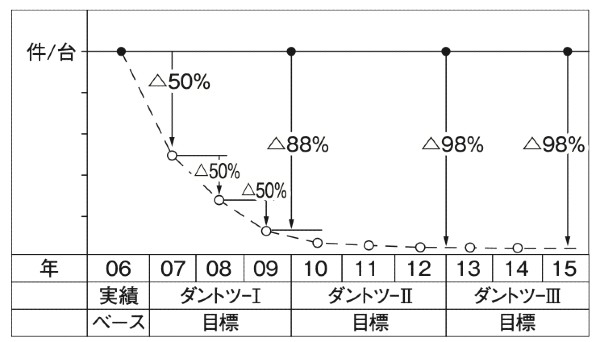 One of the key elements of the Dantotsu approach is the setting of ambitious targets. Figure 1 (above) shows how the reduction target for the “number of defects per vehicle found in finished vehicle inspection”, which is a typical index, was set in Phases I, II, and III. Of course, Toyota is famous for its incredible ability to improve. But was there so much room for improvement? It may be hard to believe, but there was.

Figure 2 (below) shows the changes in the number of defective vehicles out of total number of manufactured vehicles at the Takahama Plant from 2007 to 2015. The Takahama factory was evaluated as having relatively good quality when it first opened in 2007. As you can see in the graph, it shows a wonderful “Dantotsu curve”. Factories in other country have achieved similar results. If you look closely at Figure 2, you will also notice that the mountains and valleys are getting smaller and smaller. The number of defects generally jumps during new car launches or in the event of sudden fluctuations in the number of vehicles. We can clearly conclude that the Dantotsu quality method has become a force to suppress the occurrence of defects. Looking back, the company’s top executives told us: “The basics are the same for every country. First, make quality visible to everyone in the field. Then, take quick and steady measurements. Make sure that what you can do in advance is designed and produced. Weaving it into the preparation, we immediately implemented countermeasures and ensured defects do not occur again. We persistently repeated this process over and over again. There are some defects for which the cause cannot be identified immediately, but was the countermeasure taken correct? The results will tell you: if it doesn’t reduce the defects, then something is missing or something is wrong.” 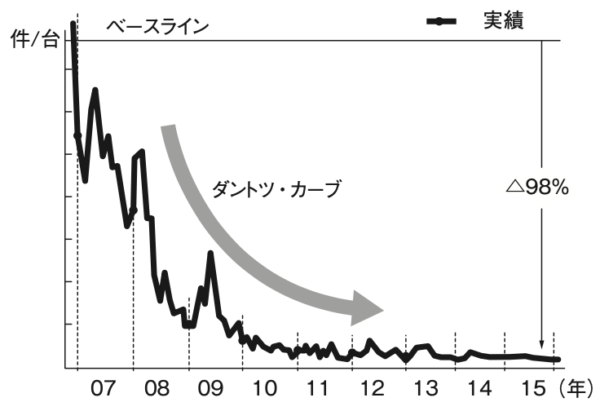 Prior to setting goals, the program entailed redefining defects in relation to the “flow of things” and “flow of quality information”. This was indispensable for later goal setting and standardization of how to proceed. Only a common definition can lead to healthy competition and learning!

In the quality corner in the center of the factory, which is easy for anyone to see, lies the Quality Management Board. It displays three levels of quality – whole factory, department, and weak point by department. A 30-minute morning meeting is held daily in front of the board. The person in charge reports the countermeasures for quality defects found the day before, discusses the causes and countermeasures for those that need to be tackled across departments, and decides the person in charge. The quality assurance department then follows up until the countermeasure is implemented. This is only half of the story, of course. The process is painstakingly observed over time until it can be determined that the defect won’t occur again.

For different departments in a large organization to work together to improve quality, a simple and easy-to-understand “procedure” is indispensable. The “8 Steps for Preventing the Recurrence of Defects” were compiled by Sadao Nomura, who led the company’s “Dantotsu Quality Activities” leveraging his decades-long experience within Toyota. His method is being used by all TICO affiliates abroad. The 8 steps include basic things, such as tidying, how to put and carry things, how to create and stick to standard work, daily management, skills development, and people. Nomura-san also carried out a comprehensive assessment of the managerial approach up to that point. Since the process is visualized in its every aspect, cheating doesn’t happen – so there is no point in window-dressing. It didn’t take long for people in the companies to become convinced that embracing the 8 steps was the fastest way to reach the quality targets.

When the simpler manufacturing defects are reduced in this way, the chronic ones tend to come to the surface. Weak Point Management (WPM) was a major force behind the team’s ability to pursue them. Recurring defects are often intricately intertwined with factors of people, material, equipment, and methods [the 4 Ms], and it is difficult to eradicate them. WPM aims to do so by visualizing the progress while taking measures one by one and persistently following up until it is confirmed that it will not recur. TICO has achieved great results with WPM, whether the problem was picking the wrong product or part number or an an oil leak in the hydraulic circuit (whose cause is much more difficult to identify).

Toyota has a long tradition of quality improvement. However, due to the long product life of TICO’s products, it was difficult for the company to reduce warranty claims costs in a short period of time. In the first three years of Dantotsu-I, their reduction was far below the target. Starting in 2010, Dantotsu-II focused on them specifically, as proved by the Claims Morning Meeting that was introduced. For 30 minutes, at the beginning of every day, key people from all relevant departments gather to see the actual products of all complaints returned the day before, decide who will take responsibility for pursuing the claim and for coming up countermeasures, and follow up.

It is significant that key people gather every morning to see the actual items sent back to the company together with a warranty claim. Every returned item is seen as a treasure trove! Since the follow-up is consistently done until the solution can be sustained, saying that “I will take care of it” does not work. At the same time, the flow of warranty claims was visualized very effectively. The causes are divided into manufacturing responsibility, supplier responsibility, and design responsibility, and the quality assurance department follows up the activities of each department. For problems such as contamination, for which it is difficult to identify the responsible department, the quality assurance department took the initiative to take detailed measures involved the company’s suppliers. At overseas factories, suppliers are also actively invited to the Claims Morning Meeting. Trust with them has deepened, and it has become easier to get their cooperation. Since 2013, Dantotsu-III has focused onto new car projects and achieved great results in reducing warranty claims costs (one of the six companies in the world has achieved an astonishing 93% reduction compared to 2006). It can be said that, with Nomura-san’s help, the team has established a new vehicle development process that can prevent defects without rework by incorporating manufacturing requirements and production preparation requirements at the design stage.