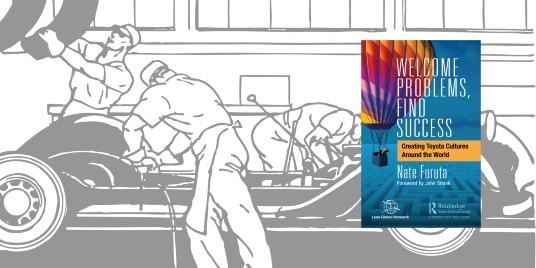 “Furuta-san is a monster.” That’s what my boss at Toyota said to me after a meeting with Kiyoshi “Nate” Furuta in late 1983. We had been in a planning meeting during the earliest stages of what would later become known as NUMMI (New United Motor Manufacturing Inc.), the company’s joint venture with General Motors. Nate was in charge of key pieces, such as the Toyota way of working, human resources, and labor relations.

In subsequent years, the Toyota Production System (TPS), then lean thinking, and then the Toyota Way would become famous. Over the ensuing decades, most pieces of the system would become well understood by many, even as the means by which to apply the pieces in diverse, real-world settings would remain elusive to most.

Culture is often tossed up as a catch-all concept for everything in an organization that can’t be quantified or easily explained in mechanical terms. But using a compelling term, such as “culture,” doesn’t solve anything unless we can break it down into concrete, actionable terms. To build a strong organizational culture, nothing is more central than the pieces Nate oversaw at NUMMI: the Toyota way of working, human resources, and labor relations (NUMMI was a union shop).

Human resource management (HRM), including labor relations, is often considered a pain-in-the-ass afterthought, a job for people who can’t do anything more important, or a mysterious black box of unnecessary complex and arcane policies and procedures. Not so in Toyota’s system.

Lucky for us all, Nate has authored the book (co-published by the Lean Global Network and Taylor & Francis CRC/Productivity Press) Welcome Problems, Find Success: Creating Toyota Cultures Around the World. In it, Nate takes you along as he and others lead Toyota’s intense globalization, from the early 1980s to recent days. He will introduce you to famous characters, like Taiichi Ohno and Fujio Cho, and lesser-known executives, like Kenzo Tamai, the head of the company’s HRM function in the 1980s. Explaining the central role of HRM, Mr. Tamai told me,

“Human Resources is so important, we can say ‘no’ even to the president. Our policies and thinking are fundamental to the company’s culture, so they shouldn’t be altered easily based simply on any one person’s opinion or wish of the moment. It takes five years to truly understand the effect of a change in basic HR policy. If our values, such as respecting the humanity of each employee, are held sincerely, we need to be conservative about changing policies until we learn their impact. But don’t misunderstand: HR is not the point. We aren’t here to be a good at HR; we are here to sell better cars to more people.”

To me and many others to follow, this was an example of the kind of Toyota thinking that flew in the face of conventional wisdom and, like holding two opposing thoughts together at once, characterized the deep thinking that lay underneath every decision of the company: to find success, welcome your problems.

This is not a book about HRM policies and procedures. This is a deep dive into the way senior leaders embody deep awareness of HRM matters, developing and executing company strategy while at the same time developing human capability. The role of senior leaders isn’t just a matter of directing the company to achieve objectives; it is a matter of building the capability to achieve those objectives, consistently, and further developing capability as it executes.

Key to this is to develop the awareness, attitude, capability, and practice of identifying problems as progress toward achieving objectives, which is, in fact, attained through steadfastly attacking each problem as it arises. This becomes a self-reinforcing loop of the organization, tapping in to the essence of solving problems while simultaneously developing ever better problem-solving skills and better problem solvers. This loop propels an organization toward meeting its purpose while developing capability.

This is no minor attainment or aspiration. It requires a “revolution in consciousness,” as Ohno put it, and nowhere is the revolution greater than in managers’ attitudes toward problems. Every manager wants success. Does every manager welcome problems? Nate argues that, if managers can learn to welcome problems, they can find paths forward to building organizations capable of the greatest success.

At the meeting that inspired my boss to call Nate a monster, Nate had been, well, not a monster, but forceful – winning arguments by the strength of his knowledge, combined with passion and coupled with vision and a sense of deep responsibility. What my boss meant by “monster” – he used a Japanized English term in the middle of a Japanese conversation and context – was that Nate had powerfully presented a way forward that would not be easy but would lead to success if we faced the uncertain road ahead with a clear vision, held our values sincerely, and adjusted to the twists and turns with open minds, welcoming the problems to come as the ultimate means of learning our way to success.

In this book, Nate will share – for the first time in print – his bold actions and points of view that informed Toyota’s phenomenal success in creating Toyota cultures around the world, beginning with a crazy three-way venture (with General Motors and the UAW) in California, to a wholly-owned, non-union operation in Kentucky, to the complex environment that is the European automobile industry. (Note: There is no actual European automobile industry – the challenges began right there.) Then finally back to the US for some mending, rework, and key innovations.

You will find no road map in the pages of Welcome Problems, Find Success. You will find some guideposts and a great many deep insights to aid you in developing your own organizational culture, inspired by Toyota’s efforts during the company’s period of great globalization. Nate and the book invite you to welcoming the problems that aren’t just in the way, but can lead the way to your organization’s greatest successes.